May 5, 2014. Notes on an undergraduate project on quantum mechanics and closed timelike curves (CTCs). It turns out that, if they make sense at all, CTCs are magical quantum doodads for finding fixed points of operators.

Closed timelike curves (CTCs) are loops in spacetime (closed) on which massive objects can travel (timelike). To visualise a CTC, we can draw it as a wormhole between points on a spacetime diagram; we could also draw a loop with a rotating lightcone.


(G) If a time traveler revisits their past using a CTC, they cannot perform any actions which would prevent them from time travelling.

In fact, Gödel invented his solution to prove a philosophical point to Einstein. Consistency seems to impose extreme and unnatural constraints on the time traveller. In physical language, a time traveler's boundary conditions are rather stringent! David Deutsch wrote a great paper (1991) where he adds quantum mechanics to the mix and figures out how the physical/philosophical picture changes.


CTC as a logic gate

Deutsch's big idea was to embed the CTC as a module in a quantum computer. This lets us reason about the local/computational features of CTCs instead of the global/geometric properties tracked by general relativity. Thought of as a logic gate, a CTC takes a qubit and spits it out earlier in time. For this reason, we label it by $-1$.

A computer is a system of identical particles (qubits) which move along designated paths and interact at reversible gates. Paths are represented by lines and gates by boxes. We assume we have a two-level system with labels in $\mathbb{Z}_2$ (mod 2). The state space is $H = \mbox{span}_\mathbb{C}\mathbb{Z}_2$. To implement the paradox (G) on a computer, attach a CTC to a CNOT gate $G$, i.e., set up the circuit below: 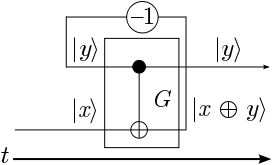 The large arrow at the bottom represents time. An incoming qubit $|x\rangle$ enters $G$ and interacts with $|y\rangle$, an older version of itself. The output of the interaction $|x \oplus y\rangle$ leaves $G$ and travels through the CTC to become the old qubit. The looped particle reenters $G$, interacts with the younger qubit, and finally leaves $G$ altogether. Think of $|x\rangle$ as a time traveller to see why the circuit takes this form!

We start by classically analysing the paradox. For computational basis elements, $G$ stores the sum
mod 2 (XOR) in the first output and passes the old ket into the second:
\[
|x\rangle |y\rangle \overset{G}{\longrightarrow} |x \oplus y\rangle |y\rangle, \quad x,
y\in\mathbb{Z}_2.
\]Consistency means that the particle entering the CTC leaves it, or $x \oplus y = y$, which implies $x = 0$. This is a computational analogue of (G): $|1\rangle$ can never enter $G$! But, in quantum land, why assume that $|y\rangle$ is a classical basis element? If $|y\rangle$ is a superposition, consistency may not force $x = 0$.

If we generalise $U_G$ to unitary $U$ (for two $n$-qubit inputs), and $|\psi\rangle\langle\psi|$ to $\hat{\rho}_{in}$, we see from $(1)$ that $\hat{\rho}$ solves the consistency problem just in case it is a fixed point of the operator
\[
\mathsf{S}(\hat{\rho}) = \mbox{Tr}_2[U(\hat{\rho}_{in} \otimes \hat{\rho}) U^\dagger].
\]Deutsch showed that all such operators have fixed points. Why? For intuition, suppose we connect an infinite sequence of identical gates; piping qubits through it will be a stationary, memoryless process like a Markov chain. But run a Markov chain long enough and (except in pathological cases) it stabilises to some state, a fixed point of the Markov chain. But let's prove it properly.


Other points of interest

The Doctor (pictured below) is not a qubit: a time-traveller is a classical rather than a quantum object. 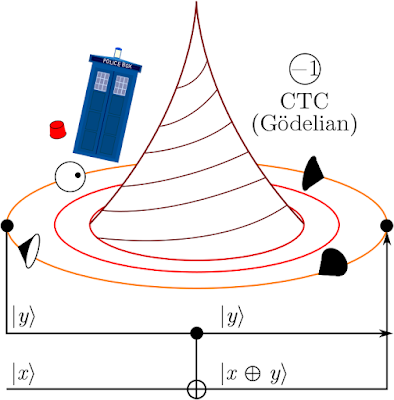 So Deutsch's "resolution" of the grandfather paradox may not help. On the other hand, if (as Deutsch thinks) the many-worlds interpretation of quantum mechanics is correct, classical objects would also be able to avoid (G). The CTC would act as a sort of gateway between Everitt universes, letting a time-traveller switch between superposed states. If they existed, CTCs would let us test interpretations of QM!

In computational terms, a CTC is a magic box which finds fixed points of evolution operators in constant time. For this reason, Deutsch's paper kickstarted research on complexity and CTCs. To the best of my (limited) knowledge, the most striking result in the area is due to Aaronson and Watrous (2009), who proved that CTCs make classical and quantum computing equivalent. CTCs would allow classical computers to efficiently simulate quantum computers. (Basically, a CTC turns polynomial space into polynomial time, allowing classical computers to efficiently simulate quantum computers.)